The store will not work correctly in the case when cookies are disabled.
Home 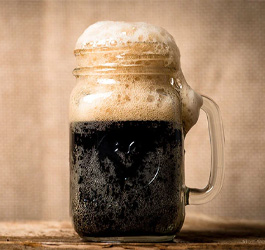 Exploring the Origins of Root Beer

Exploring the Origins of Root Beer

If you’re a lover of root beer, you may be interested to hear the history of this sweet and bubbly beverage. You’d also be interested to know that the root beer we know and love today bears little resemblance to its original cousin. Root beer was so-named in a literal sense, as it was used to describe beers made from roots.

Well before the first root beer was ever brewed and tasted, root teas and medicines were very popular drinks. In fact, the indigenous peoples of North America brewed teas and made tinctures primarily for medicinal purposes, making them from roots, barks, flowers and berries. Sometimes sassafras, sarsaparilla and wintergreen were also used in the concoctions.

It was thought these plants had many healing qualities, mostly to boost immune function, prevent allergies and reduce inflammation. Back then, root-based beverages were not meant for recreational consumption. There was good reason for that –they didn’t taste very good and some could be dangerous when overused.

When European colonists made their way to the Americas, they heard all about the health benefits of these beverages and decided to try their hand at making their own root-based drinks.

In particular, they introduced the medieval tradition of “small beers,” which were low-alcohol beers (one to two percent ABV). Europeans tended to brew small beers for many reasons. Not only were they safer than water, they were cheap, nutritious, and not as likely to make you drunk – a plus when drinking these beverages during the day.

To make small beers, Colonists simply shortened the fermentation time and re-used grain from stronger beers. They started off by adding Sassafras and Sarsaparilla roots to brew what they called “root beer.” Their purpose was not to get drunk, but instead to hydrate safely and benefit from the medicinal qualities.

Just like with apple pie and other American recipes, families passed down their root beer recipes through each generation. This led to many varieties being derived from many blends of American plants, yeast, water, and sugar. Root beer was sold in small drugstores and shops all across America, with merchants touting their health benefits.

Tweaking of a Recipe

This persisted until the 1870s, when a Philadelphia pharmacist by the name of Charles E. Hires got the recipe for a particularly tasty root beer from the innkeeper’s wife where he was staying on his honeymoon. He brought the recipe to a few local professors asking them to help him tweak it for commercial production.

The professors were able to come up with a shelf-stable powder, which was much easier to distribute as the base for this yummy non-alcoholic drink. The professors also were able to extract the strong laxative effect that was a drawback of the original recipe.

Because Hires was a Quaker, he was opposed to alcohol consumption of any kind. He crafted an alcohol-free version that took off quickly in popularity. He originally sold it as a syrup in kegs to owners of soda fountain shops, where its popularity with the young crowd in particular skyrocketed.

Not much has changed today. Root beer remains a staple in every store’s soda aisle, beloved by children and adults alike.

From Stewart’s to Virgil’s, we carry all the most popular brands of root beer. You will love taking a look at our vast selection of root beer. Just call us today to ask any questions or place an order.