The Natural Benefits of Tea Over Coffee
Popular 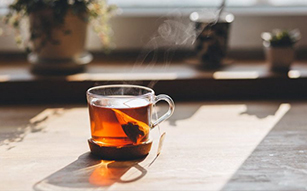 The Natural Benefits of Tea Over Coffee

The Natural Benefits of Tea Over Coffee

It’s 6:40 a.m., and you muster the strength to reach your arm out of bed and hit the snooze button on your phone one last time. You trudge down the steps, yawn for the fifteenth time and meander your way to your coffee machine to kick-start your morning. There’s no better way to begin your day than with the soothing flavor and “pick-me-up” effect of a nice, warm cup of coffee, right? Well, maybe not.

For many, the debate between coffee and tea boils down to mere preference. If you step foot on a college campus, you’ll likely see steam wafting from the coffee cups in professors’ and students’ hands. During the warm winter months, you’ll also find packages of tea flying off the shelves. Whether it comes down to flavor, the desire for caffeine or something else, everyone seems to have an opinion about their beverage of choice.

Ultimately, however, coffee beans tend to pack less natural benefits than their tea leaf counterparts. If you’re not convinced, a quick overview of the physical and mental perks of tea consumption should do the trick.

If you prefer your drinks entirely caffeine-free, a gulp of lemon tea is enough to satisfy both your thirst and mind. Teas infused with lemon and herbs use their natural components to produce a calming effect strong enough for a peaceful state of mind.

If you haven’t partaken in a “coffee-splurge” or overindulgence, consider yourself lucky. Jitters are a common side effect of excessive caffeine consumption and can have negative health effects on the individual. While coffee is known for its ability to quickly jolt us awake on dreadful mornings, it can also prevent us from relaxing when necessary.

Try a more natural alternative by sipping some Organic Black Tea instead. Black tea, among other varieties of tea, still possesses some caffeine after undergoing the fermenting process. You’ll get to experience the same desired energy without the eventual crash.

Research has demonstrated the metabolic benefits of drinking green tea. As a virtually fat-free drink, green tea such as Oi Ocha quenches your thirst without tricking you into consuming added calories. Better yet, tea keeps you going longer by providing you with the energy to power through your day. Less weight and more energy? What’s not to love!

Ultimately, is there a fundamental difference between coffee drinkers vs. tea drinkers? Both drinks boast their own unique set of health benefits and perks, and the coffee lover or tea fan will likely choose their drink accordingly. If you’re looking for some added natural perks to your morning brew, though, we suggest you skip the coffee and head for the tea instead.