Where Does Artesian Water Come From?
Popular 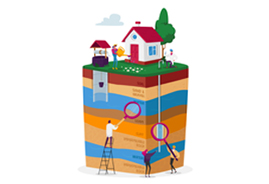 Where Does Artesian Water Come From?

Where Does Artesian Water Come From?

You may have heard a lot of brands selling artesian water and you may wonder:  How is artesian water different from tap and spring water? Where does it come from?

While the water itself isn’t chemically different, how it gets to the earth's surface is. Groundwater that comes from aquifers between layers of nearly impermeable rock, like shale or clay, is compressed when under pressure. If such an aquifer gets tapped by a well, water tends to rise to the top and flow out from the well onto the surface of the land, says the USGS.

Water that is confined and tapped in this method is known as having artesian pressure, with the aquifer itself known as an artesian aquifer. The word “artesian” is derived from the name of a French town called Artois in the Roman city of Artesium. This was the site of flowing artesian wells that were tapped in the Middle Ages to provide fresh water to villagers.

An artesian well is created by water that flows across a patch of degraded land, then passes into porous rock, such as sand, gravel, or limestone. This porous substance is situated within an impenetrable, non-porous rock layer, which creates a high amount of pressure.

As this pressure brings water to the surface, it will spurt from the ground. It looks kind of like a small geyser without the steam. The water pressure inherent in artesian wells is higher than you may realize. In fact, large artesian wells provide water for multiple households over entire neighborhoods.

You will probably spend a bit more on artesian water than other bottled water, because of the way it is stored within its natural source. Artesian water doesn’t have any chemical or physical differences from standard groundwater. Fun fact: Fiji is one of the most well-known brands of artesian water, and it’s actually collected from an aquifer in Fiji.

In the United States, Georgia and Florida draw their artesian waters from the Floridan Aquifer System, which features two of the biggest artesian wells in this country. But Australia is home to the deepest (9,800 feet in depth) and biggest artesian well on the planet, called the Great Artesian Basin.

Many people prefer the taste of artesian water from other types of bottled spring water.  Whichever style you like, we’ve got you covered!

If you love drinking artesian water, you can stock up in bulk with all your favorite artesian water brands with Beverage Universe. We carry all the major artesians, including Evamor, Fiji and Sole.