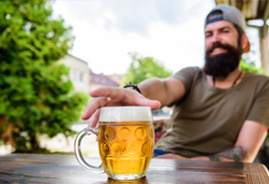 The Growing Popularity of Non-Alcoholic Beer

The Growing Popularity of Non-Alcoholic Beer

As the non-alcoholic category of alcohol continues to grow, booze–free beer is a go-to choice for many people. Some don’t want the buzz that comes with alcohol, while others want to still socialize but remain alert for a work meeting. It’s also a great option for those who want to try out the taste of beer but don’t want to commit to the alcohol content. And in so-called “Dry January”, where many people forgo alcohol in an effort to get healthier, sales of no- or low-alcohol drinks skyrocket.

As such, the non-alcoholic (NA) movement continues to grow, largely driven by changing mindsets towards consumption. In fact, within the beer category, “no/low” is one of the fastest-growing segments, facing an increase of 96 percent over the last year, says Forbes. Non-alcoholic beer is great for occasions such as workday lunches when alertness is a requirement, or at late-night parties where you have a big work meeting or workout the next morning.

The numbers don’t lie. Only five percent of Dry January participants consumed non-alcoholic beer in 2019. By 2022, that number had jumped to 29 percent.

And in 2019, only 12 percent of beer drinkers had an interest in no- and low-alcohol beer. But by 2021, that number grew to 16 percent. So as you can see, non-alcoholic beer is becoming a contender in the beverage industry, particular in on-premise sales.

Whether you’re new to the no/low scene or you’ve tried out non-alcoholic beer and are intrigued to know more, it’s good to know you have a lot of options to choose from. You’ve got the tried and true brands, as well as the lesser-known brands.

For instance, most people have heard of O’Doul’s, which has been the popular choice for decades. If you want the taste without the buzz, grab an O’Doul’s.

Then you have brands that are most known for making alcoholic beer but that also offer no/low options. Take Heineken, for example. They make a 0.0 version with fruity notes and a soft yet malty body. It’s brewed and fermented with a unique A-yeast, made with natural ingredients and gentle alcohol removal. Coors is also a well-known brand that makes a no-alcohol beer called Coors Edge.

For lesser-known brands, check out Buckler or Kaliber, both making names for themselves in the no/low space.

See? We told you there were lots of choices. So check out our site today and see just how many options are at your fingertips!

Beverage Universe Has a Big Selection of Non-Alcoholic Beer

Stock up on non-alcoholic beer for your summer parties today when you browse our site or give us a call.