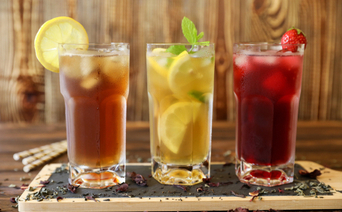 Ah, tea. Nothing like a cup of tea to start and end the day or recharge in between. Richard Branson loves it so much he drinks twenty cups a day.

If you look for its source, you get transported to multiple places—like in front of emperor, scholar, and herbalist Shen Nung’s boiling cauldron 5,000 years ago. There, mysterious leaves fell in and brewed together an irresistible aroma. All gathered round and had a sip. It was adored so much, the tea ceremony was born by the third century AD. By the 1100s, Zen Buddhists were taking it to Japan and Tibet to fire-up meditation.

Tea’s influence rides an epic journey through history, defining nations and nations within nations—uniting the world with relish. Today there are over 1,500 types of teas in four typical categories: black, white, green, and oolong. The flower and fruit varieties diversify the collection. At Beverage Universe, we serve New York City’s bottled tea needs. But before you start brewing yourself, have a seat at the tea table and enjoy what we have to offer.

You don’t have to hop on a 10,000 mile flight to Bali to score a cup of hibiscus tea. You can get it specially crafted right from Brooklyn. Packed with herbal rewards, Brooklyn Crafted’s Hibiscus Flower Herbal Tea lowers blood pressure and is rich in antioxidants. Also try Prunella, 10-Herb, Hawthorn Berry, Brown Sugar & Ginger, and Chrysanthemum & Pear. Small batch crafted with no artificial sweeteners or flavors, they’re all vegan, and all yours.

Made in Italy since 1901, Galvanina makes specially made peach, lemon, green, and black teas. The water is sourced from the ancient water tables that pass under Rome so you can sip your tea while pretending to talk genius with Bernini and Cicero at the Pantheon. Beverage Universe sells the organic varieties in packs of twelve.

Beverage Universe also offers cases of Snapple teas if you can’t be bothered to try anything new. Nevertheless, a beverage that blurs borders and has connected the world, tea should be enjoyed your way. So however you like your cuppa tea, whether it’s old or new school, green, black, white, or oolong, remember—we are One Tea Nation.

Here is a great article about Lemonade and Iced Tea